True Tales from Tech Support The Funniest issues Ever Solved.

We're sure you've heard the classic tech support stories about customers who say their computer coffee holders are damaged and demand replacement. After hanging around for a few minutes, assistive technology reveals that customers talk about CD drive trays! 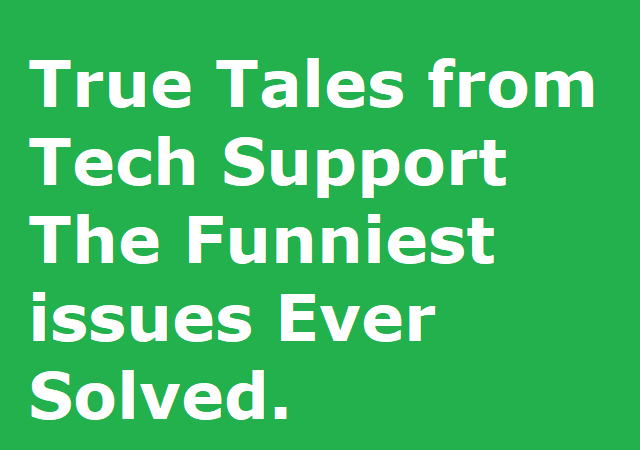 This story has been lying around for so long that they have gained urban legend status. It alludes to the fact that this technique can be confusing to anyone, that the problem isn't always the first, and that finding a solution can make you shake your head in disbelief. Or may vibrate with laughter.
We've prepared several tech support stories for your pleasure for a bit of fun. And they are fine. The first incident happened to this writer.
Cute Contact Center Agents work in front of customer service. In its world, each ring or cellphone screen tests its ability to provide exceptional customer service. This is a successful benchmark for converting complaints and requires a lot of skill, insight, and training for agents. In this world where customer experience is king, how agents handle customer queries can effectively build a brand. How do customer service representatives make your customers feel happy?

True Tales from Tech Support The Funniest issues Ever Solved:

Great Disconnect:
Over the years, we traveled with me, working on telephone technical support for specialized printer manufacturers. Most of our support calls are related to mechanical damage, questions about our specialized software, or assistance operating machines.
The brain unit comes from an Epson printer and uses Epson stock, so the primary connection between the printer and the computer is pretty much a bullet. However, one day, a female customer called and said she received a written message "Printer not available every time they tried to print."
"Printer not available" is a standard Windows message when the printer does not turn on or the computer is not connected. Not taking anything lightly, since the technical support rule is essential, I'll confirm that the printer is not. Then, the printer cable is disconnected in several ways. Easy repair.
I asked the customer to check the back of the printer, and they said that the USB cable was plugged in. I've pulled it off and reattached it to make sure it fits right. Then I asked him to make sure the cable was plugged into the back of the computer.
After rioting several times over the phone, he managed to get to the computer and was told that the USB cable was also connected from there. After a quick check, the computer still says the printer does not exist. Well, I guess maybe it won't be that easy.
My instincts still say that somehow the printer is not connected to the computer, and I tell the client the same. But they have checked the cable, and the USB cable is rarely worn out, so I continue.
For the next 20 minutes, I run a standard tech support procedure, such as restarting the printer, restarting the computer, retrieving a USB cable in a different port, refresh the printer driver. Nothing works, and the only explanation left is that the printer motherboard may be bad. But I still think the problem is very fundamental.
Ultimately, as a last attempt before sending it a new motherboard, I'd inform that customer that he needs to test the printer with a different USB cable and a different computer.
Suddenly, the phone hit me hard, "Someone's son..." So it's silent.
A few seconds later, in an embarrassment voice, he said, "I rechecked the printer cable... and there are two cables."
"Two cables?" I asked carefully where to go.
"The two parallels are the same," he said. "Someone is plugged into the printer, and one is plugged into the computer. But they've not connected anywhere."
After taking the time to digest this and mentally kick myself for ignoring it, I've connected the cable in the printer to the computer. Of course, in seconds, everything works perfectly.
Customers remember that her husband had done something on the computer before, and that was because he didn't do everything right. Since the cable is in the mouse's nest on the back of the computer, he didn't see it when I first asked him to check the line.
We cancel everything, and I learned two valuable lessons. First, I believe in my instincts. The second is that every time I tell the client to "check the plug-in cable," I need to add "and make sure it's the same cable."
Call the supervisor now: Tatyana has problems billing clients and insists on speaking with supervisors. Tatyana understood that the feelings went very fast. As he spoke slowly to the customers, he realized that this was not a regular call. Customers are not happy after suffering a tragic family loss due to a car accident.
Tatyana expressed sympathy for the customer's problems and allowed him to express his disappointment. Immediately, customers are silent, and thank you very much for Tatyana. But with enthusiasm, even after completing the questions, customers still want to talk to the supervisor. Tatyana was a little nervous. Didn't that solve the problem? But to give her a breather, her supervisor told her that the customer appreciated how Tatyana handled the call and only wanted to give it to them.